Rank colors and order varies within systems and styles. Typically ranks are divided by the levels prior to black (color belts, or Kup), and the levels after black (Poom or Dan) as junior and senior.  Champion Taekwondo uses a 9 Kup system of rank. There are 9 levels from beginner to black belt and 9 levels of black belt. We begin at the larger number for white belts and count down toward the highest Kup rank. The colors that represent each Kup are earned in this order:

At Champion Taekwondo there is a special rank between the kup and dan called bo dan. This is a candidate for black belt rank. They wear a special black belt marked with a white band, which symbolizes the journey from white to black.

The senior section of ranks is also divided by 9 ranks. Each black belt level is called a degree or dan. The numbering sequence for dan ranks is opposite of the color belts. It begins at first dan and counts up. You can tell which degree someone has earned by looking at their belt. The level is indicated by the number of gold bars. In our style students with 1-3 degrees can assist with teaching and train as an Instructor. An instructor with 4-6 degrees are considered Master and 7-9 degrees are referred to as Grandmaster, which also has an age requirement of 40 years minimum. 10th dan rank is sometimes awarded posthumously for a lifetime dedicated to the practice of Taekwondo.

Kukkiwon standard recognizes a rank of black belt for practitioners under the age of 15 called poom. These students have passed dan level tests but will not receive full dan rank until reaching the required age. Poom ranks transition automatically to the equivalent dan rank without any additional levels or testing. Champion Taekwondo follows this standard set by the Kukkiwon and poom black belts wear a red and black belt rather than a solid black belt.

To advance from one rank to the next, students qualify for promotion testing. Each kup level is assigned a minimum length of time practicing, minimum number of classes attended, nine stripes earned, and instructor recommendation. (For what is tested at each level see Taekwondo Program Curriculum.) When a student has each of these requirements they are issued a testing application which will need to be filled out and turned in prior to the next available rank testing date. Rank tests are held the first Friday of each month at 5:30pm.

It may take longer for Champion Taekwondo students to qualify for their black belts than some newer, more contemporary taekwondo schools require. We believe that when someone is working towards a black belt faster isn’t better. All belts are earned at the individual’s pace and are measured by skill and not a timeline. The amount of time someone spends getting to black belt isn’t standardized but promotion from one black belt to the next is, and it takes years. In fact, the Kukkiwon style imposes age and time within rank limits on poom and dan promotions. Champion Taekwondo applies those same standards to the levels prior to black belt. 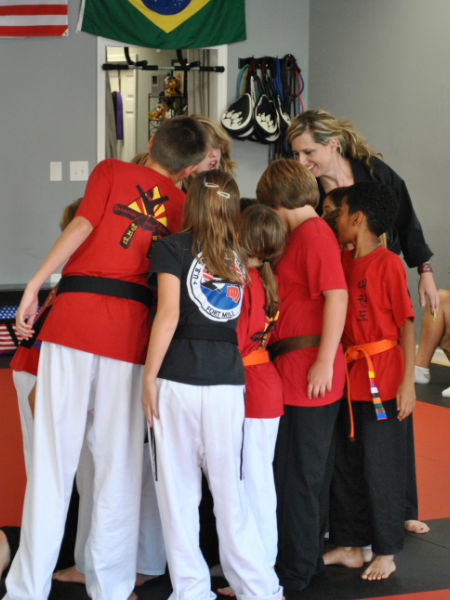 What’s the difference in Taekwondo and Karate? Or Kung Fu... or Jiu-Jitsu?

The teacher. If you have specific training goals then the martial art you choose to study does make a difference, but the physical movements should never outweigh the culture of the academy. There are studios that are more sport focused and some spend more time on self defense. Some serve competitors and some are filled with families that want spend more time together. Some simply want to move people through the belt levels so they can keep kids on the mat and charge more testing fees. Ask questions about style specifics but be sure to observe with your personal interests in mind. If you want to get in shape, see if the instructors and senior ranks are making fitness a priority. A big sign in the window promoting martial arts fitness won’t help you, but being around fit people will. With the growing popularity of modern martial arts there are different types of great quality training available. The most important difference is the way the material is presented and that the environment suits the individual. The one thing all martial arts have in common is that they develop character.

How do the belts work? What are the stripes?

Champion Taekwondo follows a 9 color belt system. The order for promotion is white, yellow, orange, green, blue, purple, brown, red and black belt candidate. This is a common approach with modern taekwondo following the Kukkiwon style. There can be variations in the color order and look of the belts but there are generally nine levels to be passed prior to earning the level one black belt and nine levels of black belt. Champion Taekwondo has a unique system for testing the curriculum within each level. For every belt prior to the black belt candidate all students are required to earn nine colored stripes which represent different areas of curriculum. Regardless of belt color all stripes represent the same area.

How long between belts?

There are minimum times training for each level and a typical promotion rate, but all invitations to test for the next belt level are judged on skill and not time. All students are different and the curriculum is designed to meet the individual’s needs. Some levels may take longer and some may seem easier depending on the student. Skills assessment is a daily process and feedback is given often for exactly what each student needs to progress. While asking for promotions or stripe testing is not allowed, asking what a student needs to work on in order to be ready is encouraged.

How does testing work? Is there a test fee?

Champion Taekwondo holds a rank test the first Friday of each month. Once the student has earned all nine tapes at their belt level and met minimum time requirements they will be given an invitation to test on the next available date. During the test they are required to show proficiency in each area of their level curriculum and are graded by a panel of black belts and Master Jenn. There is a $40 test fee for each color belt level. Promotions and belts are not awarded during the test. They are presented in the first class attended after passing the test.

Do students have to do sparring with contact or attend competitions?

All students are required to learn the fundamentals of sparring. Olympic Taekwondo rules and current training methods are taught as part of the general curriculum. Orange belt is the first level to practice light contact sparring with safety gear. The intensity does increase with level, but the students also gain more control over the techniques with practice. Self control and awareness is taught and expected at every level of sparring. Safety rules are followed without exception. Training for competitive tournament sparring is not part of the general curriculum. It is available but only by recommendation and would be considered private or small group instruction.